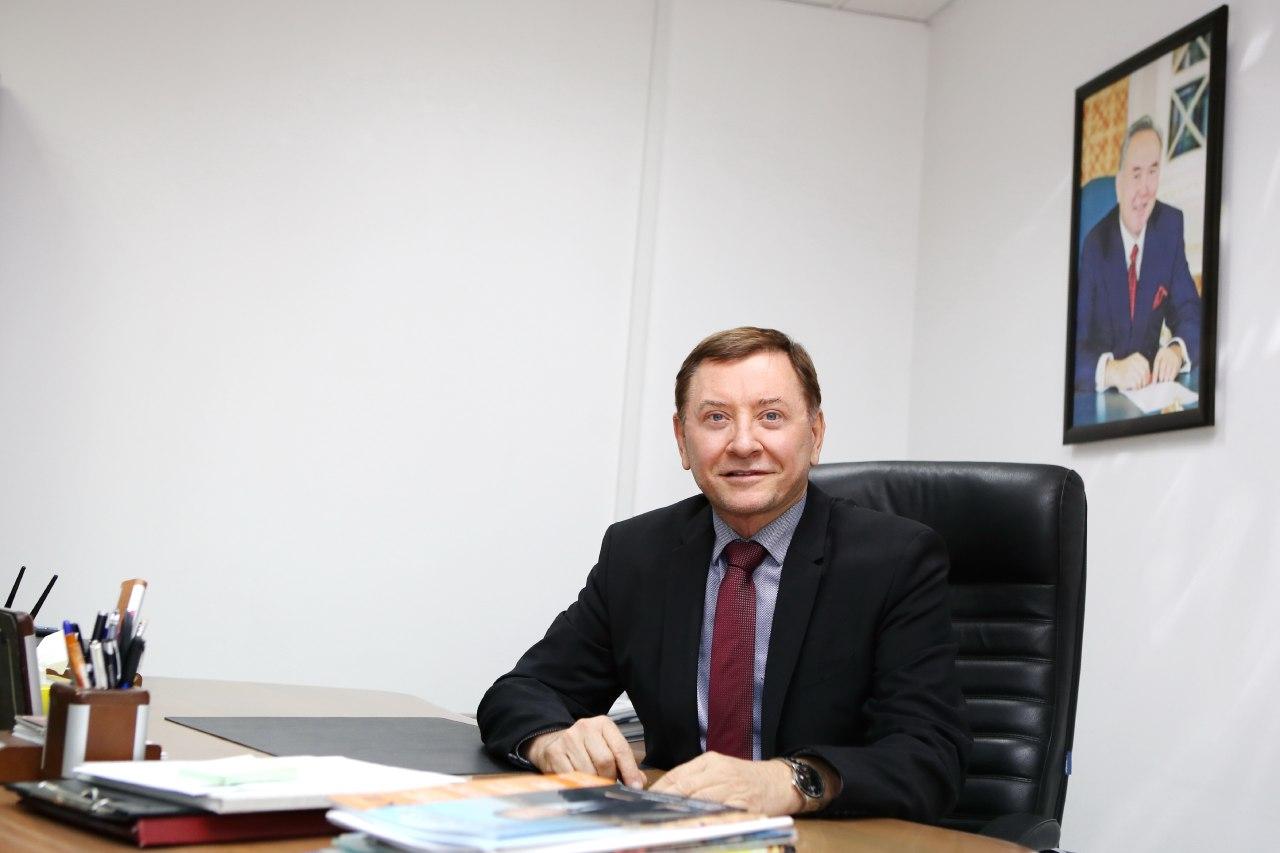 Executive Director of the Republican Association of Mining and Metallurgical Enterprises.

The main event in the mining and metallurgical complex, of course, was the entry into force on June 29, 2018 of the Code on Subsoil and Subsoil Use.

It is based on the principles of the liberalization of legislation, ensuring clear and transparent methods of state regulation. For the first time in the post-Soviet space, a new legislative act opened the way for the introduction of the Australian model, advanced in the mining sector.

The Subsoil Code has introduced many innovations. This is the transition to the CRIRSCO international system of reporting standards for solid mineral reserves, the introduction of the Western Australian model of granting the right to subsurface use on the principle of “first come, first received”, ensuring the availability of geological information, mandatory reporting of the subsurface user, development of the State Subsoil Fund Management Program. Along with this, the Code for the first time introduced a new type of subsoil use right - artisanal mining. The transition of contracts to licenses has begun. In a word, the adoption of the Code on Subsoil and Subsoil Use contributed to the establishment of a clear and precise regulation of relations on subsoil use, maintaining the balance of interests of the state and investors in the field of subsoil use

This document marked the beginning of a serious reform of the industry, causing the need to reform tax and environmental legislation.

The second significant event, I would point to the entry of Kazakhstan into the International Committee CRIRSCO. The Subsoil Code, as I noted above, just confirmed the transition to the international system of reporting standards for solid mineral reserves CRIRSCO.

The introduction of international reporting standards is especially important for investors, so that they can be sure that Kazakhstan has the correct system of stock accounting, it is a transparent system that meets the best international standards.

Almost all exchanges in the world in the field of subsoil use accept reports prepared according to CRIRSCO standards, since they contribute to a significant reduction in the main risk for investors - the risk of not confirming resources and reserves specified in the companies' reports.

And, of course, one cannot fail to note such an important direction as the beginning of the widespread use of digital technologies at the enterprises of the mining and metallurgical complex. The fourth industrial revolution, or "Industry 4.0", has become a hot trend all over the world. With the introduction of digital technologies, production and transport costs are reduced, business processes are being optimized, new business models are being introduced, and the competitiveness of enterprises is increasing.

In the coming years, a number of major projects are being implemented in the mining and metallurgical sector that will affect the Kazakhstani segment of the industry.

A large project for the construction of a new electrolysis plant (KEZ-2) is being implemented in Pavlodar. ERG is working on this project to generate additional added value for products through its own production of alumina and electricity. The end product of KEZ-2 will be primary aluminum. Future production of aluminum alloys is also being considered. The finished products will be sold to the countries of the European Union and Asia, as well as to the domestic market. Practically in scale, it will become another enterprise with an even greater production volume and more advanced technology.

The next significant project, on which great hopes are also pinned, is the expansion of processing capacities at Aktogay GOK, located in the East Kazakhstan region.

The Aktogay GOK expansion project promises to be one of the leading in the industry. As part of the project, it is planned to build a second concentration plant for processing sulphide ore, as a result, the capacity of the GOK will double - from 25 to 50 million tons per year. Taking into account the Bozshakol and the first Aktogay concentrators already in operation, this will be the third globally significant mining project built by KAZ Minerals in Kazakhstan since 2016.

The third project is also promising and innovative. The introduction of hydrometallurgy - processing of concentrates from poor sulphide copper ores - will allow Kazakhmys to involve in the development of ore with a low copper content, thereby replenishing the raw material base and extending the production activity of the Zhezkazgan site for more than 50 years.

Hydrometallurgy will be introduced in parallel with the existing technology - pyrometallurgy. The Zhezkazgan copper smelter will receive raw materials from more promising deposits - the Zhilandinsky group and the second stage of Zhaman-Aybat.

Depletion of the mineral resource base is an inevitable and expected process. Nevertheless, according to the company's geological service, there are still about 1 billion tons of explored poor off-balance copper ores, which are currently unprofitable to process using the existing traditional technology. For the processing of such ores, a large hydrometallurgical plant will be built in Zhezkazgan in the future.

We expect significant changes in the MMC in the area of ​​environmental regulation. This is primarily due to the reform of environmental legislation. Despite the fact that the enterprises of the mining and metallurgical sector have been allocating huge financial resources for environmental protection all these years, the situation in the field of ecology has not changed. The need for cardinal changes, the development of a draft of a new Environmental Code, was obvious.

The draft code consists of 7 main principles, the main of which is “the polluter pays and fixes”. The amendments provide for the application of the environmental impact assessment (EIA) procedure for large enterprises of the "first category". From 2025, integrated environmental permits (IEP) will be applied for large facilities of the "first category" and the best available technologies (BAT) mechanism will be introduced, aimed at reducing emissions into the environment. Companies that have switched to BAT are exempted from emission fees, for the rest, emission fees will gradually increase by 2, 4, 8 times every three years, starting from 2028 (from 2025 for the top 50 large enterprises).

Obtaining IEP will become mandatory for newly commissioned enterprises. At the same time, local executive bodies are obliged to finance environmental activities at the expense of incoming environmental payments in the amount of 100%.

The cost of implementing BAT is enormous, so it is accompanied by economic incentive measures throughout the world. Otherwise, large-scale implementation of expensive projects for the implementation of BAT without state support will affect the growth of the cost of manufactured products and reduce its competitiveness in world markets.

Therefore, the enterprises of the industry, realizing the need to reduce emissions of pollutants into the environment, expect that along with the tightening of environmental requirements, the draft Environmental Code will provide economic incentives for the introduction of BAT.

In the coming years, we also expect an expansion of the scale of geological exploration to provide the mining and metallurgical industry with a stable resource base. The existing deposits are gradually being depleted. At the same time, the study of the territory of Kazakhstan is slightly more than 25%. It is no coincidence that the main prerequisites for reforming the legislation in the field of subsoil use were the state of the mineral resource base and insufficient investment in the industry.

Serious changes will take place in the labor market. Under the influence of the Fourth Industrial Revolution, new professions will appear, old ones will disappear or partially change. Already now, people of intellectual work are being ousted from the market, performing routine work: calculation, design, etc. The nature of work is also changing, training time is shortening, the requirements for an employee's competence are radically changing.

The introduction of advanced technologies requires fundamental changes in the qualifications and personality of the employee. Moreover, technological innovations reduce the “life time” of any profession: they appear and disappear many times before the eyes of one generation. This is contrary to the conservative nature of man. Therefore, according to experts, at the present time, it is not specialization that comes to the fore, but the competence of employees. Competencies will quickly become outdated, and this is a new challenge for rethinking the model of modern education, which should be transformed into “education throughout life”.

In the mining and metallurgical industry, we must be ready for the possible release of labor and have the potential and tools for the effective employment of laid-off workers, including through retraining. It is necessary to revise the entire system of retraining and advanced training, including training of personnel for the mining and metallurgical complex. New technologies already in the medium term can dramatically reduce the need for labor, as well as change its structure. In general, it is necessary to change the requirements for the quality of human capital caused by the Fourth Industrial Revolution.

Speaking about the mining and metallurgical complex of Kazakhstan, it is necessary to touch upon personnel issues. At all times, potential applicants were interested in what profession is most in demand, whether the demand will remain in the future, etc.

The demand for a profession is dictated by time, and during the pandemic, all sectors of the economy revised their usual processes. Changes expected in the future 3-5 years, “professions of the future” have become not only relevant now, but also become a need in the “here and now” mode.

At the beginning of this year, the list of demanded professions included: "underground electrician", "mining engineer", "ore-dresser", "drifter", "mechanic for equipment maintenance and repair", etc.

Today, this list can also include professions that ensure the implementation of automated systems, robotics and digital technologies. The structure of the basic professions of the industry is changing. The education system a priori should be ahead of the curve, through analysis, to sharply feel the needs of the industry and prepare the specialists necessary for the industry.

According to the results of studies carried out in the first quarter of 2020 in the industry, the following situation was observed. There was a certain shortage of workers, in particular, metallurgical technicians, repairmen, electric and gas welders, civil engineers, electrical engineers, engineers for setting up and testing automated control systems, mechanical engineers. A shortage of skilled workers is found in various production areas of the industry. The enterprises of the industry direct their efforts to solving these problems, for example, independently training crushers, bunker operators, machinists, operators. These changes are a serious challenge for us. It is necessary now to prepare for tectonic shifts in the labor market. Whose task is it: business, government or people themselves? It seems that coordinated joint actions of all labor market participants.